maternity clothes: scared to try the jeans on again… pregnancy jeans are definitely in the near future. also, an online boutique that has plus maternity had a huge sale yesterday and William said I could buy some AND my mother-in-law bought me some too! so I have no officially bought (not worn) my first maternity clothes. stay tuned.

symptoms: I joked with my doctor at our appointment this week that I was glad I was in the 1/3rd of women who don’t experience sickness, but sometimes wished I actually felt pregnant. I TAKE IT BACK! the last two days I have definitely felt pregnant. the toothbrushing nausea is at another level. my supersonic smell came in and I smell things I don’t want to smell and it’s terrible! I have almost thrown up twice in the last two days, but some miraculously was able to calm myself down from it both times. NO food sounds appetizing. Hubs and I had a sam’s lunch date (usually one of my favs) and all I could stomach was 1 ½ soft pretzels.

cravings/aversions: can everything be an aversion? I want nothing. well, nothing except king cake (a normal January craving for me even when I’m not pregnant).

movement: not yet, but soon? It’s crazy to me that the baby is moving (saw it on sonogram!) but I can’t feel it yet.

gender: still no hunches, but we should know the last week in february and announce/have a gender reveal on March 4th.

looking forward to: this sickness spell to go away! second trimester, so close! knowing if he or she is a he or she.

milestones: we made our happy news public on social media! 12 week appointment. First non-internal sonogram. no more progesterone or baby aspirin (she didn’t say I had to take it, but I asked about it and she said it wouldn’t hurt anything to take it). a big week!

best moment this week: we saw our little baby’s arm move during the sonogram! and he or she looked like a baby! 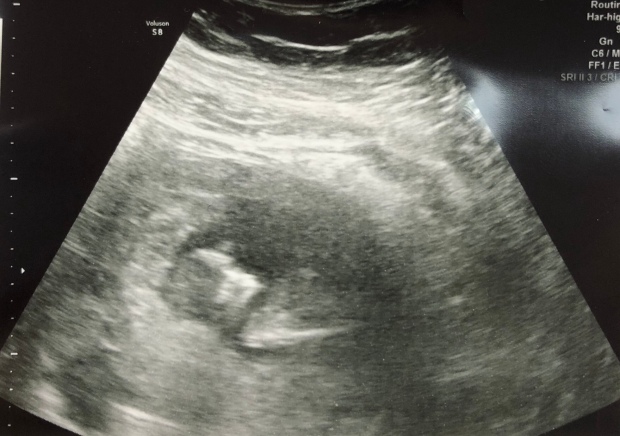 One thought on “Twelve Weeks”