February 20, 2013January 5, 2017
I know you’re all probably like, “Why do you keep talking?! Give us recipes already!” Don’t worry! I have them, pictures and everything. I’ve just been inspired lately with random bits of unsolicited encouragement and inspiration. First leopard flats and being you, now motivational celebrating victories talk. Tomorrow? A recipe! I promise. (Don’t hate me if I break that promise, I have it prepped and ready! But you know what happens sometimes when I promise.) 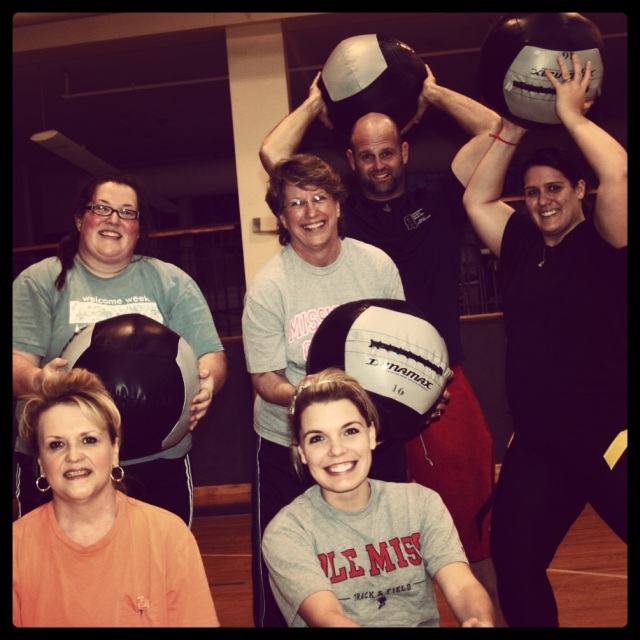 Five weeks ago I started a boot camp. An intense boot camp. Some of my boot camp buddies and our trainer/killer (the one guy) are in the picture above. A little history about my weight loss/getting healthy journey. I’ve always struggled with weight. I’ve been chubby since I was two. In high school I wanted to lose weight because I thought being a certain size made be beautiful, worthy, or cool. I never wanted to try just for me until two years ago. Two years ago I started Weight Watchers. Prior to those two years I was the biggest I had ever been. I was defeated in so many areas of life. A new job, a new year, a new/old state, a new beginning, and closure of two years of counseling where I learned to love myself for the first time led me to think clearly and without defeating thoughts! I decided I wanted to do Weight Watchers for me and my health, not because skinny was pretty or to find self worth, but just for me. My mom and dad had both had heart attacks since I graduated from college. My dad was having serious health issues which later lead to liver cancer and later lead to death. I wanted to be healthy! I didn’t want to be a statistic of family genes and bad lifestyle choices. And for the first time, I knew I could do it. I believed in myself. The defeated thoughts were no more (okay not completely true, they come back often, but after counseling I knew how to recognize the defeating lies and combat them). In the first three months of Weight Watchers, I lost 25 pounds without working out at all, just counting points (it REALLY is a great program and I’ll always be an advocate for it). When I started to plateau, I added in some working out. I was proud of myself the day I worked up to one hour on the eliptical! Especially since the first time I did it I could only do five minutes.

Yep. I took a picture and will always save it. A milestone worth remembering. Then I had toe surgery… Not allowed to wear tennis shoes for two weeks. Two WEEKS?! Two weeks is a lot when you’re finally in working out [almost] everyday mode. I was introduced to water aerobics which I fell in love with and did faithfully for a while. They I started doing two classes a day! Zumba and water aerobics. And then… I got pneumonia. No working out for at least two week again. After than my dad starting get worse, life was harder, and I would work out here and there but pretty much had given up until boot camp. I had lost 43 pounds with Weight Watchers, but gained half of it back over holidays and losing my dad. I say all that to say, working out is NOT natural for me, ever, at all. I like how I feel after I do it, but I hate doing it. I hate sweating, I hate wearing work out clothes, it’s NOT natural for me. It’s hard and I have to work at it. After four weeks of boot camp and losing no weight (in fact, I gained!), I was getting frustrated! Yes I felt better, could tell in my clothes, had more energy, knew I was gaining muscle and getting healthier, but no weight loss was a serious motivation killer! I finally decided I wasn’t going to focus on the numbers and just give it my all. Last night, for the first time in my life, I didn’t finish last at something requiring physical activity!

I was third out of six! I can’t say I’ve ever been so proud of myself! I mean, it was AWFUL! I hated every moment, but when I got to huff and puff out the word “FINISHED” to my trainer and write down my time and not be the last one everyone was sympathetically (okay really it’s encouraging, TOTALLY encouraging and the best intentions possible, but still embarrassing when you’re last) cheering on at the end as they were all already finished. I felt empowered and awesome! I finally decided to weigh myself this morning after not doing so in two weeks and… I LOST 10 LBS!

Let’s celebrate victories guys! Every small victory that isn’t small at all. Taking the effort to work out when you haven’t been doing so at all is a victory. One pound lost is a victory. Not getting out of breath when you walk up the hill to work, it’s a victory! Working out three days a week when you previously worked out none, victory! Loose pants, victory. Making it three laps around the gym without have to slow to a walk which you’ve had to do every other time, victory! Looking in the mirror and loving who you see before you, VICTORY! Not believing the lies that Satan (it’s him, it’s really him) tells you about yourself, VICTORY! Getting up early to spend time with Jesus when before you “never had enough time,” VICTORY! Asking for forgiveness, forgiving yourself, accepting grace that none of us deserve but get instead of living in self-condemnation, VICTORY! Choosing to grieve losses in a healthy way instead of letting yourself get numb and avoidance, victory, big, huge, not small at all, victory.

Yesterday was the three month anniversary of my dad no longer being here. I miss him all the time, a lot. I never want to stop missing him or forget him or anything about him. The thought of not missing him, not thinking about him, or not remembering him makes me want to cry more than actually missing him. I decided on the month two anniversary to set a monthly reminder. Not to dwell in sadness, but just to never forget. The reminder is simply titled, “Remember.” Like I’ve said, and everyone says, a million times, we all grieve differently. For me, remembering is good. You know I’m on this goal kick, weekly, sometimes daily, sometimes hard, sometimes simple goals. My accountability partner helps me come up with them sometimes. For Monday, the three month anniversary, we came up with three goals. 1. Come up with five reasons I’m thankful for my dad. 2. Freak out if you need to freak out, feel what you need to feel, cry if you need to cry. 3. Bake something. Why? Well baking makes me feel good and gives me a sense of accomplishment. Feeling good and accomplished are good things to feel on potentially sad days.

So I did it! I’m thankful that he had the kindest heart of anyone I’ve ever known. He helped so many people get jobs and get back on their feet. He literally would have given someone the shirt off his back or boots off his feet if it would have helped them. I’m thankful for the sense of security he always provided, coming from a land of crazy family life. Even if he wasn’t physically there, I knew he was there. I’m thankful for his work ethic that he [tried] to pass down to me. I could never be as hard and as dedicated of a worker as he was! But I am a hard worker and dedicated, because he taught me that was important. I’m thankful for the things he taught me about money. I’m bad at money! He knew it. But he was so good at it and some things stuck with me. I still won’t apply for credit cards when people ask and my reason still is, “my dad would kill me.” Lastly, I’m thankful for how he modeled forgiveness. He was one of the most forgiving people I’ve ever met and gave so many chances, over and over and over again.

AND I baked a Skillet Chocolate Chip Bread Pudding. What goes best with bread pudding? Caramel sauce! I haven’t attempted caramel again since my three times of failing at it last summer. I’ve continued to make cheating caramel sauce (brown sugar, butter and cream), but even after buying the pan I didn’t have and knew I needed to make successful caramel, I was still scared. I decided the “remember” day was as good of a day as any to try again. And I did it! I also decided I will make a point, almost for every “remember” day to do something that makes me proud of me, like defeating caramel! It was a good thing to feel on a sad day.

Oh, and I did cry and feel. I cried yesterday and I cried while writing this, while proof reading it, and while re-proof reading it. And it was okay. I was okay. I am okay. Crying is okay! Okay? (Could I possibly say okay any more?)

So all that rambling to say, CELEBRATE VICTORIES! Silly ones like waking up early. Making good life choices ones like choosing the salad instead of the pizza, losing one pound, not finishing last, or working out more than you did last week. Spiritual freedom ones like spending time with Jesus, conquering a sin with His help, or learning to love yourself and not be self condemning. And serious, big deal, healing ones, like remembering the loved ones you’ve lost, facing grief instead of numbing it, and figuring out what helps you heal and grieve in healthy ways.

MAKE CARAMEL! PAT YOURSELF ON THE BACK FOR SETTING A GOAL AND CHECKING IT OFF! CHALLENGE YOURSELF AND BE PROUD WHEN YOU WIN!

Let’s celebrate victories. Our own. Each others. Let’s agree to this okay? It’s a simple, good thing to do.